THE MINUTEMEN SEND AT FRESHMEN TRIO TO THE MSTCA BOYS PENTATHLON 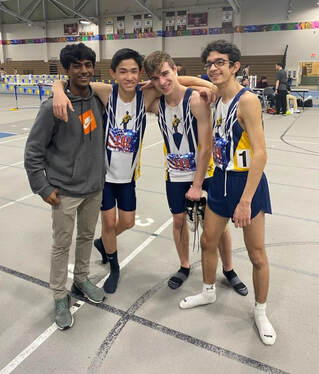 BOSTON, MA - After the girls competed in the Pentathlon yesterday, Wednesday it was the boys turn. The boys Pent features athletes competing in the 55m High Hurdles, Long Jump, Shot Put, High Jump, and 1000m. Michael Gerfen, Jayden Bai, and Antonio Lopez represented The Minutemen and all three finished among the top 10 freshmen in the competition.

​Gerfen was The Minutemen's top finisher on the day by placing 53rd overall - second among freshmen - with 2477 points. Gerfen's day was highlighted by his 18'11.25" best leap in the Long Jump. That jump earned him 537 points and was the second best jump by any underclassmen in the competition. Bai was Lexington's next best finisher with 2336 points. His day saw him run a great Hurdle race, in which is time (9.65) was the fifth fastest time by any LHS hurdlers this season. Along with that, Bai had a great debut in the Long Jump where his best leap took him 17'8.75." Lopez finished with 1640 points, and his day way highlighted by his 3:01.68 time in the 1000m.

Up Next
The Minutemen are back at Reggie Lewis for one final time this Indoor Season when the boys 4x800m Relay squad of Selvin Backert, Evan Eberle, Josh Backert, and Andrew McGovern will compete at the New England Championships. The meet is set to begin at 10:30am.