RCG AND ANNA YANG COMPETE AT THE MSTCA GIRLS PENTATHLON 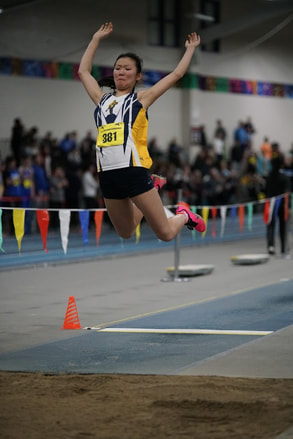 "RCG" had the highest finish between The Minutemen's two competitors by scoring 2784 and placing 14th overall. Along the way RCG turned in a pair of season bests. Her leap of 17'2.75" in the Long Jump was sixth best in the field. In addition, the senior threw a season best in the Shot Put, where her best toss of 27'9.25" was 16th in the among her competitors.

Anna Yang's day saw four PRs in the five events of the pent. To begin her afternoon Yang ran a PR of nearly a second in the Hurdles (10.26). In the High Jump, Yang cleared 4'7.75" which was another lifetime best. The sophomore would also throw the Shot Put a personal best 20'1" before toeing the line for the 800m. In the 800, Yang turned in one final PR to cap off what has been nothing short of a breakout season for the sophomore. Her time of 2:44.88 earned her 518 points, bringing her total to 2312 points and a 41st place overall finish - seventh among underclassmen.

Up Next
The Minutemen's multi-event group will be back in action tomorrow as the boys will get their chance to do the Pentathlon. The meet - at Reggie Lewis - is set to begin at 3:30pm.